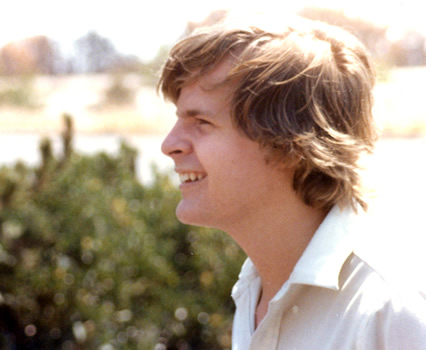 The family of Scott Johnson, who died near North Head more than 30 years ago, has offered to match a reward for new information that leads to the conviction of those responsible for his death, with the total now to up to $2 million.

On the morning of Saturday 10 December 1988, the body of Sydney-based American National, Scott Johnson, was found at the base of a cliff at Blue Fish Point, near Manly’s North Head. Scott was aged just 27.

A coronial inquest in 1989 found Scott had committed suicide, with a second inquest in June 2012 returning an open finding.

The matter was referred for a third inquest and, in 2017, the then-NSW Coroner, Michael Barnes, found that Mr Johnson fell from the cliff top as a result of actual or threatened violence by unidentified persons who attacked him because they perceived him to be homosexual.

Following the inquest, the case was referred to a specialist investigative team, who are continuing to conduct inquiries into the circumstances surrounding Scott’s death under Strike Force Welsford.

To assist with inquiries, the NSW Government increased the $100,000 reward to $1million in December 2018.

Steve Johnson, who lives in the United States, said he had returned to Sydney to support the efforts of detectives to find Scott’s killer or killers.

“I have been greatly encouraged by the recent progress in the investigation, and truly honoured by the reception Scott’s case has had with the community,” Mr Johnson said.

“We now live in a more tolerant and open society – particularly here and in the United States – where societies enable their LGBTIQ communities to be their true selves, live safely and unlock their full potential.

“I wish Scott had been afforded the same opportunity, and every effort I put into helping find his killer(s) is also to acknowledge that bullying and gay-hate crime will not be tolerated in our community.

“So, in addition to the existing $1 million reward, I will provide up to an additional $1 million for the NSW Police Commissioner, at his discretion, to award to any person who comes forward with new information leading to the arrest and conviction of my brother’s killer or killers

“This reward will be for new information and will be in addition to the $1 million reward that Commissioner Fuller announced in December 2018.

“With a reward of up to $2 million on the table, I am hoping that Scott will finally get justice.

“Please, do it for Scott, do it for all gay men who were subject to hate crime, and now, do it for yourself.”

Commissioner Fuller said this was the first time such an offer had been made in NSW and acknowledged Mr Johnson’s tenacity and commitment, as well as his selflessness.

“It has been 31 long years in Scott’s family’s pursuit of answers, and the dedication to their brother is as inspiring as it is heartbreaking,” the Commissioner said.

“Steve has never wavered in his fight for justice; dedicating his time and efforts to Scott’s honour, and today, he stands before you to offer his own money in hope that detectives get the elusive pieces to this puzzle.

“Our job as police officers is to solve crime, so when dealing with cases like this, it’s frustrating knowing that a family’s pain and suffering could be eased by that someone who knows something coming forward.

“It’s no secret police offer rewards in hope they can motivate those people, and while the last increase proved somewhat beneficial for investigators, we’ve still got more work to do.

“While we’d like to believe a person’s conscience would force them to come forward, it’s clearly not in this case. So, if you’ve got the information we need – and cash appeals to you – there’s now up now up to 2 million reasons to talk to us.”

Minister Elliott said it was a privilege to provide police with the resources needed to solve crime and deliver justice for victims and their families.

“The reward program is one of many NSW Government commitments to ensuring the people of NSW are served and protected by a world-class police force,” the Minister said.

“There are currently more than 250 rewards on offer for information that range from $50,000 to $1 million.

“It is encouraging to know that investigators have already been able to use our reward to gather important information for Scott’s case.

“I hope Mr Johnson’s generous offer, coupled with the NSW Government reward, will complement the diligent work of investigators to finally find the answers he has been seeking.”

Strike Force Welsford’s Det Ch Insp Yeomans thanked Mr Johnson for his continued support and for once again making the journey to Sydney.

“Our team has been working tirelessly on Scott’s case and, while we’ve been humbled by Steve’s reward offer, we are not going to lose focus,” Det Ch Insp Yeomans said.

“One of our greatest challenges has been facing a wall of silence, but we are starting to break through.

“At this time, we are currently following some very specific lines of inquiry – essentially, we believe that given the culture of gay hate at that time, the events surrounding Scott’s death would have likely been bragged about.

“This means there are two potential groups with information: those who were involved and those they told. Now is the time for them – or anyone who has information – to come forward.”

Up to $2million reward can be paid to anyone who has fresh information that leads to the arrest and conviction of the person or persons responsible for Scott’s death.

Anyone with information that may assist Strike Force Welsford detectives is urged to contact Crime Stoppers: 1800 333 000 or https://nsw.crimestoppers.com.au. Information is treated in strict confidence. The public is reminded not to report crime via NSW Police social media pages.